Eight days. That’s how long Catherine planned to be in Nebraska visiting her folks. Now, eight days may seem remarkably short to some, but to Catherine and I, eight days is a really long time. Naturally, we decided that if we are expected to be apart so long, then we might as well enjoy some quality time together. So, I packed an overnight bag and drove the hour and a half to Portland, Maine with Catherine and we began a search for a decently priced hotel. Now, if you’ve never been to Portland, Maine in the Summer time, then let me tell you- there is absolutely no such thing as a decently priced hotel. None whatsoever.

We stopped first at the Days Inn. This facility certainly wasn’t Hilton owned, so there was no way it should cost us over 100.00, right? Incorrecto mundo. We were quoted 140.00. And the worst part? The “free” continental breakfast they threw in to sweeten the deal didn’t begin until 6:00AM. Unfortunately for Catherine and I, we needed to be at the airport by 4:30AM. This meant no mildly toasted bagels with questionable expiration dates, tepid coffee, or individually packaged frosted flakes for us. We were going to have to make do with whatever facility was open that early in the morning…such as Cumberland Farms at the gas station…eh.

After leaving the Days Inn, we began a futile search around Portland for a “decently” priced hotel. To assist us with this, Catherine searched online which helped us to narrow locations down according to some of the prices and reviews. One motel had multiple reviews that claimed that they had “bed bugs” *shiver*, another claimed that a similar facility in the area was acting as a refuge for people of questionable morals and background- not quite sure what that means, but we were unable to bring ourselves to find out. Finally, we spotted one that was nearby to our location that was slightly cheaper than the Days Inn. The reviews weren’t horrendous so we decided to check it out.

Our first impression…The motel was in a slight state of disrepair. As we pulled into the motel, we noticed weeds growing alongside the building and random, abandoned objects littered around the property. These objects consisted of a shopping cart, tools, unidentified materials, and a mop (not quite sure who decided it would be a great idea to mop the parking lot-but kudos to them for trying!). There was a couple screaming at each other outside one of the rooms and a questionable exchange occurring on the floor beneath them. After circling the building three times (the entrance was unmarked, and honestly, all the doors looked the same to us), we pulled into a random parking spot and gathered our thoughts. It was during this brief moment of heavy silence that Catherine and I both noticed the large red, white, and black sign haphazardly nailed to a post in front of us. The sign warned us not to leave our items in the car and mentioned theft and criminal activity.

Naturally, we mutually decided that 140.00 at the Days Inn was well worth it if it meant we wouldn’t be sleeping on beds littered with bugs, or we wouldn’t be the unfortunate recipients to theft or other nefarious deeds.

After dropping our belongings off in our room (which was quite comfortable and devoid of bugs, thank goodness), we had dinner at Uno. The restaurant boasted a diverse menu that appeals to a variety of people. For example, I enjoyed a mushroom and cheddar flatbread (I’m a vegetarian), and Catherine delved into buffalo chicken mac and cheese. While I sipped a raspberry iced tea, Catherine enjoyed a pomegranate margarita. The service was spot on! Our waitress was friendly and engaging and the atmosphere was perfect. As we chatted about every random and entertaining thought that popped into mind, Catherine grew increasingly giggly. Let me tell you, the woman can toss back shots like a champ, but give her a cocktail and her eyes grow bright, her cheeks become flushed, and you just have to brace yourself for an evening filled with shenanigans.

Now, if you ever find yourself in Portland and are in need of a good book or two, or three, or four *cough*, you have to check out Books-a-Million near the mall ( I write Book Reviews by the Way). After finishing our dinner at Uno, we headed over to Books-a-Million. You see, there is one place that Catherine and I cannot resist…a bookstore. Books are our Achilles’ heal. It’s bad enough that if a strange man pulled up to us on the street in a white van and offered us books instead of candy, I honestly worry that we’ll fall for it. We’ll probably grin like a couple of foolish, overly trusting victims from those horror movies I watch and gleefully leap into the van in order to snatch the book from his deceiving fingertips. Luckily for us, this hasn’t happened yet.

In the bookstore, Catherine and I decided to 1. Buy some books, 2. Browse every section you can think of, and 3. Purchase a dirty magazine to chuckle over when back in our hotel room. As we surveyed the store, our eyes immediately honed in on the bargain section. Thirty minutes later, an employee of the store noticed me teetering under the mountain of books I balanced in my arms and kindly offered to grab me a cart. Yes. I am one of those people that needs a freaking “cart” when shopping for books. Between Catherine and I, our cart filled rather rapidly. Did we receive astonished gazes from other fellow book readers as we proudly strolled around with our bounty? Yes. Did we care? Absolutely not.

Now on to the fun part. The dirty magazine. What struck me as amusing was the placement of the magazines. Standing in the aisle, the National Geographic and Travel magazines were to the left of us, and the risqué reading material for men and women were to the right. At the time, there were no other patrons in the aisle with us which gave Catherine and I plenty of time to peruse the selection. Interestingly enough, all the reading material were geared towards male viewers. Now, you would think with this being the 21st Century, and post Magic Mike and Fifty Shades of Grey, more people would be comfortable with the idea of creating dirty magazines geared towards female viewers, but that is clearly not the case. Very disappointing. It was during this last thought that Catherine and I noticed two men step into the aisle. The second they noticed us standing in front of the “male” magazines, they quickly spun on their heels and casually picked up the nearest magazines, their backs to us. Now, it’s possible that they had every intention of coming to this aisle in hopes of picking up the latest copy of Better Homes and Gardens, but it is even more likely that Catherine and I were currently occupying the spot they wished to be in.

To test my theory, I encouraged Catherine to move away to the next aisle to admire an impressive display of cat-themed calendars. We waited a moment, and then peeked around the corner. As I predicted, the gentlemen set down their copies of Better Homes and Gardens and began perusing magazines that featured an entirely different form of “hedges” *cough*.

Snagging a nearby Cosmopolitan, Catherine and I left Book-a-Million with our bounty and headed for Chili’s which was conveniently located next to our hotel. You can imagine our server’s surprise when instead of ordering dinner, we ordered a large skillet cookie topped with vanilla ice cream and a couple of “girly” tropical cocktails. Let me tell you, that coconut-blended beverage was a gift to my tastebuds, a delightful taste of vacation in a chilled glass. Catherine and I sucked those bevvies down like a couple of thirsty college girls on Spring Break in Cancun. And that skillet cookie? Oh lordy. That chocolate gooey delight will be something I dream about in the years to come. I highly recommend it if you’re looking for a sugar rush and two minutes of pure, sinful heaven.

A few degrees warmer, definitely fuller, and a whole lot more giddier, Catherine and I made our way back to our hotel room. Luckily, it was a short jaunt across the parking lot. Once inside, we leaped onto our double beds and preceded to chatter about everything that popped into our minds. I’m not quite sure how it happened (though I highly suspect it was the consumption of a few cocktails), but Catherine decided to demonstrate a few of her favorite yoga poses. I learned new ways in which to contort myself like an oddly-shaped pretzel. I will not, however, fall into the “happy baby” pose with as much enthusiasm and glee that Catherine has for the pose. She’ll make a man a very “happy” man one day *wink*.

Our night ended with our causal perusal of our Cosmopolitan magazine. This was where Catherine and I learned about a new trend among women called a “yoni egg”. Interestingly enough, a yoni egg looks exactly what you think it would look like….an egg. Except it’s smooth and polished stone of some sort and is meant to be used for sexual wellness and healing. Ladies, if you don’t know what a yoni egg is, look it up. All I can say is that it’s placed somewhere the sun doesn’t shine *wink*.

The next morning, tired and hangry, I dropped Catherine off at the airport. It’s never easy saying goodbye to your best friend. Especially when you’ve gotten used to seeing them every day. Eight days may seem short to some, but to us, it may as well be a lifetime.

Check in soon for our next adventure! 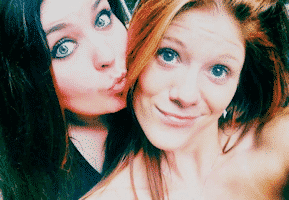