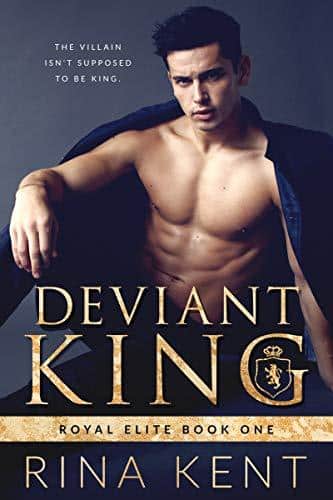 
It’s not COVID-19 Making you Feverish…It’s This Book Series:

It is a truth universally acknowledged that a bookworm forced to stay home, must be in want of…well…nothing really. As long as we have a massive TBR pile on our bookshelves, or Kindle Unlimited, we can shelter in place for days, weeks, months. During week 1 of quarantine, I decided to start reading Deviant King by Rina Kent, after weeks of it sitting unread on my kindle after I shamelessly fell victim to a well-placed Facebook ad and downloaded it. A few chapters into this book and I was kicking myself for not having started it sooner. I have always been a fan of anti-heroes and stories with darker, less-than-normal themes. However, oftentimes these types of genres take things a little too far. Finding that sweet spot (pun intended) where we can still enjoy our darker, more villainous hero and scenes that skirt beyond the bounds of “normal”, all while not hating the characters or feeling entirely uncomfortable with certain actions and situations, is incredibly difficult.

To my utter delight, Deviant King, or rather the Royal Elite book series, hit that sweet spot and more. I DEVOURED the trilogy in a mere two days and immediately hopped into the spin-off titled Cruel King (which, by the way, was equally delicious). Aiden King, the male protagonist in the trilogy, was everything I loved in darker, romantic anti-heroes. While he had a turbulent, tortured past, Aiden didn’t let the experiences define him and was able to move forward (even if his father was unable to do so). Aiden was unapologetically obsessive, somewhat controlling, and immovable with his thoughts, feelings, and decisions. In the past, I would become frustrated with characters that determined they were meant to be with someone, then a piece of news or an event would have them questioning every feeling they had. Aiden was never like this. Once he determined Elsa (our heroine) was his, that was it for him.

Elsa was a fascinating match for Aiden. After an accident occurred when she was a child, she was unable to remember anything before then. This accident, coupled with her faulty heart and loss of memory, made it hard for Elsa to connect with a lot of people. She ends up locking her emotions inside while at school, earning her a reputation for being “frozen”. It didn’t help when Aiden threatened her during their first ever interaction in front of their peers. As Elsa’s memories begin to unlock, her own tortured past begins to reveal itself, and both characters find their pasts inexplicably intertwined. The intensity of Aiden, coupled with Elsa’s strength and burning curiosity, continued to grow throughout the trilogy.

The Royal Elite series was dark, gritty, and sexy as hell! The amount of chemistry between Aiden and Elsa was undeniable as it practically bled through the pages and into my fingertips. I couldn’t even tell you if it was my own heart issue acting up, or the story was causing a crazy amount of palpitations. I can easily say, without hesitation, that Aiden King was one of my favorite dark romance genre heroes. While some of his actions may seem a bit taboo, and his intensity may appear too much, Aiden never stepped over the line and he never gave up on his feelings, and he certainly never gave up on Elsa.

The Royal Elite series was its own kind of beautiful, sexy, dark magic.