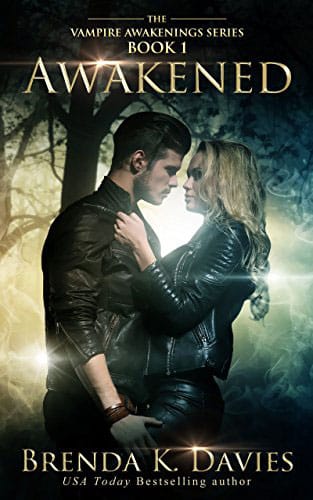 Traumatized by her past, and struggling to move on from it, Sera has spent the past three years of college hiding herself from the world and content to stay that way. A chance encounter with Liam shatters her sheltered world, leaving her stunned and shaken by the strange feelings and emotions he arises in her, feelings she never thought she would experience and that frighten her in their intensity.

Harboring a dark and deadly secret of his own, Liam knows that he should stay away from Sera; that he will only bring her more hurt, but he is irresistibly drawn to her and unable to deny himself the pleasure that only she can bring to him. But when their pasts collide with their present, and Liam’s true nature is revealed, will their love for each other be enough, or will they be torn apart forever?

Awakened is the first novel in the Vampire Awakenings series by USA Today bestselling author Brenda K. Davies. The story follows Sera, a young woman navigating her last year in college, while struggling with an experience that has left her uncomfortable and hesitant around men, and Liam- a young man who also attends the college with a dark and dangerous secret of his own. When Liam notices Sera at a party, he instantly decides that he needs to meet her- this chance meeting leads to a whirlwind romance that neither of them expected. Sera opens to Liam early on about a previous boyfriend who left her traumatized back in her hometown, and Liam discovers just how protective he can be with her. When the object of her nightmares makes an appearance and threatens Sera’s life, Liam makes a decision that ultimately changes the course of their relationship.

Besides Sera and Liam, the story provides a handful of other characters that help to move the plot along. Sera has two best friends that she interacts with frequently, Liam has four close friends all sharing the same secret as Liam, and then there’s a woman who used to be close friends with Sera who ultimately betrays her, and finally there’s a villain from Liam’s past that makes a deadly appearance. While many of these characters were interesting, there was a lot to keep track of. Sera mentions a strained relationship with her parents, though we never really find out if this relationship will ever be mended. I was also left wondering if Sera’s best friends would ever find out about what Liam, and eventually Sera, are. So, that part of the story is left to the imagination.

The story, overall, was fast-paced and provided excellent conditions to get to know the characters better (such as the campus frat house and the cabin in the woods where a handful of the characters were snowed in together). The woman who turned Liam and his friends into vampires seemed interesting enough and provided some suspense- though I wish she had provided a bit more wickedness to the story- for example, when she first happened upon Sera in the woods and they were alone, this meeting could have ended in a more drastic way. The chemistry was heated enough between Liam and Sera, and their feelings for one another were evident throughout the story. All-in-all, Awakened was fun, intriguing, and satisfied my need for a good read. 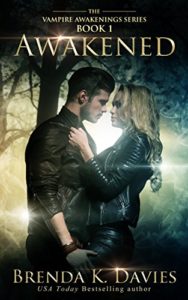