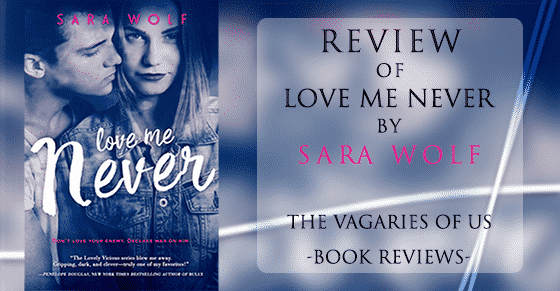 Review of Love Me Never by Sara Wolf

Don’t love your enemy. Declare war on him.

Seventeen-year-old Isis Blake hasn’t fallen in love in three years, nine weeks, and five days, and after what happened last time, she intends to keep it that way. Since then she’s lost eighty-five pounds, gotten four streaks of purple in her hair, and moved to Buttcrack-of-Nowhere, Ohio, to help her mom escape a bad relationship.

All the girls in her new school want one thing—Jack Hunter, the Ice Prince of East Summit High. Hot as an Armani ad, smart enough to get into Yale, and colder than the Arctic, Jack Hunter's never gone out with anyone. Sure, people have seen him downtown with beautiful women, but he's never given high school girls the time of day. Until Isis punches him in the face.

Jack’s met his match. Suddenly everything is a game.

The goal: Make the other beg for mercy.The game board: East Summit High.The reward: Something neither of them expected.

Review of Love me Never

Love Me Never is the first novel in the Lovely Vicious series by New York Times bestselling author Sara Wolf. The story follows Isis Blake, a seventeen-year-old girl who has recently moved from Florida to Ohio with her Mom. After a traumatizing experience with a boy who not only broke her heart, but left scars emotionally and physically, Isis reinvents herself by losing all the extra weight, dying a part of her hair purple, and emotionally safe-guarding herself by adopting a flippant and perky attitude. But this newfound sense of justice and strength is tested when she meets Jack Hunter, an aloof and condescending boy with a personality cold enough to freeze the Sahara.

What happens when you mix fire and ice?

You get explosive and witty dialogue, and scenes fraught with tension and an underlying twinge of burgeoning interest and passion.

I found Isis to be an interesting and sometimes perplexing character. Her inner and outer dialogue is seamless. She rarely has a “normal” or sensible thought process. While she thinks in a very humorous and flippant way, there were times when I wanted her to snap out of it, so she could think a little more coherently. While Isis comes off as confident, she thinks very poorly of herself. Her self image had previously been destroyed by a boy she had been in love with in Florida, a boy she has dubbed “Nameless” in the book. Even after losing weight, trying to appear joyful and sure of herself, and being told numerous times by her friends and Jack that she’s attractive, Isis continues to tear herself down about her looks. Not once does she believe anyone when they compliment her on her looks. That got frustrating (though I understood why).

It was fun to watch the “battle” unfold between Isis and Jack. While they are so different, both characters have been struck by grief and tragedy in some way. I believe it is in this that they both begin to understand and accept one another. I had hoped, however, that there was just a bit more chemistry between the two of them. I have my fingers crossed that the burgeoning passion between them in this book begins to flourish even more so in the next!

All-in-all, a good read! I got plenty of laughs, enjoyed working out the mystery behind Jack’s secrets, and getting to know the insecure-though-seemingly-confident Isis.

Check it out today and tell me what you think!