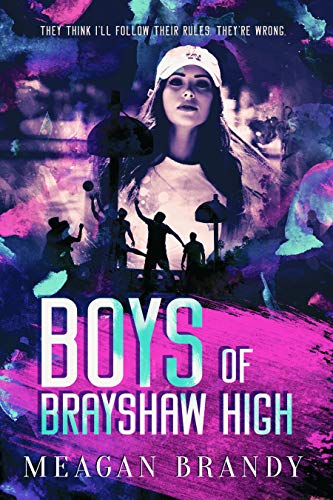 "Girls like you aren't exactly welcomed at a place like this, so keep your head down and look the other way."

Those were the exact words of my social worker when she dropped me in my newest hellhole, a place for "troubled teens".

I didn't listen, and now I'm on their radar.

They expect me to play along in their games of hierarchy, to fall in line in the social order they've deemed me fit.

Too bad for them, I don't follow rules. Too bad for me, they're determined to make sure I do.

Inconceivably attractive and treated like kings...these are the boys of Brayshaw High.And I'm the girl who got in their way.

Releasing January 17th, 2019Note: This is book one in a three book series

Boys of Brayshaw High is the first novel in a series by author Meagan Brandy. The story follows Rae, a seventeen-year-old girl living in a toxic environment with her drug addicted mother, and the mother’s continuous string of flings. Rae’s experiences and inner turmoil have made her hardened and distrusting, isolating her from her peers. Her instincts are to shy away from affection, to avoid connections to others, and to defend herself against verbal and physical assaults (from both her peers and her mother- and on occasion the many boyfriends and lovers her mother brings home). When Rae gets into a violent altercation with another student from her school, a social worker steps in and Rae is removed from her mother’s “care” and placed in a foster home with other troubled girls in another district- meaning she would need to attend a new school and adjust to this change of environment.

This adjustment, naturally, does not go well and Rae’s introduction to this new school, and the students that go there, begins with a heated, verbal sparring with the guys that practically run the school. These guys are Maddoc, Royce, and Captain…three attractive, wicked, athletic, and dangerous guys that instantly turn their attentions on Rae and her inability to conform to their rules. Rather than back down and let them treat her poorly, Rae continues to challenge the guys…which not only fuels their anger, but other things as well…

Maddoc in particular tries to navigate his feelings regarding Rae. No matter how nasty the cat and mouse game gets between them, Maddoc finds himself drawn to her. Their dialogue is heated and intense, and the chemistry between them is EXPLOSIVE! Maddoc is the broody one of the three guys, but he balances this out with the occasional wicked humor and smoldering intensity. The dialogue between Rae and Royce is also a lot of fun! (I may have a soft spot for this guy). And while the story itself has the subtle tone of a reverse harem (and one particularly hot scene that truly makes you wonder), there is clearly only one relationship emerging from the somewhat rocky beginning of the story- Maddoc and Rae.

I thought the plot unfolded nicely, though this was very much a character-driven novel. There was a lot of depth to Rae’s character- though I could see how many of her actions could be frustrating. Some of the decisions she made also made me want to shake her a bit- though if you really tried to understand her character and how she grew up, you’d be more accepting. It was evident from the opening scene of the novel that Rae was nothing like any other female heroine I’ve read about before (which I loved!). The ONLY minor complaint I had was that I wish Rae would have tried to develop a better friendship with at least one other female character. It felt very “Rae versus all the other females”. Perhaps this will change in the second novel?

Boys of Brayshaw High was angsty, intense, explosive, and insanely addictive! Thank goodness I started reading it on a weekend…otherwise I would have called in a sick day or two *wink*. As it is, I had difficulty coping with real life after finishing the novel…book-hangover for days. Ugh!

If you haven’t read Boys of Brayshaw High you are definitely missing out! Hands down, one of the BEST books I’ve read so far this year!