May Gold, college adjunct, often dreams about the subject of her master’s thesis - Gianlorenzo Bernini. In her fantasies she’s in his arms, the wildly adored partner of the man who invented the Baroque.

But in reality, May has just landed in Rome with her teaching colleagues and older boyfriend who is paying her way. She yearns to unleash her passion and creative spirit, and when the floor under the gilded dome of St Peter’s basilica rocks under her feet, she gets her chance. Walking through the veil that appears, she finds herself in the year 1624, staring straight into Bernini’s eyes. Their immediate and powerful attraction grows throughout May’s tour of Italy. And as she continues to meet her ethereal partner, even for brief snatches of time, her creativity and confidence blossom. All the doorways to happiness seem blocked for May-all except the shimmering doorway to Bernini’s world.

May has to choose: stay in her safe but stagnant existence, or take a risk. Will May’s adventure in time ruin her life or lead to a magical new one?

THE RENAISSANCE CLUB by RACHEL DACUS – EXCERPT from Chapter 3

A distant clang. The Swiss Guards were closing the outer doors and tourists were scurrying. Where was The Renaissance Club? In a panic, May dashed toward the Baldacchino and nearly collided with a man who stepped out from behind a pillar.

“Sorry!” she said, backing up.

The young man in black frowned and didn’t apologize. With his long, dark hair and white sleeves rolled up on muscular forearms, he looked like an art restorer. A black jacket was draped over his shoulders. He held a long wooden measuring rod, the kind used by architects centuries ago. Maybe he was rehearsing for some sort of pageant.

“Ladies are not allowed here while I’m working,” he said stiffly. He aimed the rod at the nearest column and sighted up along it.

“I know you!” she exclaimed. She knew him well.

He straightened his jacket and bowed. “Everyone in Rome knows Cavaliere Bernini. But you may not be here. I need silence. I have a very big work to complete.”

His finger pointed up at the four twisted bronze columns, where May was astonished to see no bronze canopy on top. Tons of bronze had simply vanished. She looked back at him. Bernini lifted the instrument and peered up at the nearest column. Her living, breathing idol moved to one side to get a better angle. Lean and strong, he was even more handsome than in his self-portrait.

Now he was so intent on his investigation that he seemed unaware of her and the fact that her pulse was pounding. How had she come here, and where exactly was she?

He lowered the measuring rod, framed the air with his hands, and used his fingers to make rapid computations. He stared at her so intensely that she shivered. She remembered that searing gaze in his self-portrait.

“You’re disturbing me, signorina.” He turned away, clearly expecting her to leave.

How could she possibly move? Here was her genius, his hair curled with wiry energy, materializing the restless mind under it. His prominent cheekbones gave him the Neapolitan look that had embarrassed him and made him fabricate a Florentine heritage. He made a few quick calculations and looked at her again, eyes narrowed.

He was obviously contemplating how to throw her out. Bernini wasn’t much taller than she was, but he made every inch of the difference count. May stared back, as defiantly as she could, while stunned and unable to forget the many times she had imagined his powerful arms pulling her close. She stared back, asserting herself silently as his historian. Historians didn’t blink. Though most never met their subjects face-to-face.

Turning away—did that mean she could stay? —he again used the measuring rod. A sharp, unpleasant odor assailed her nose—definitely the smell of piss, coming from a large nearby urn. His century might have towering beauty, but it had no indoor plumbing. Artists working here had to improvise. They also used urine to give a patina to metal sculpture. Despite the smell, she wanted to stay. She tried not to move, but he sensed her watching and was irritated.

“Signorina, please. I cannot concentrate. Do you not have something else to do?”

His open arrogance was true to his time, an era when powerful men flaunted their status to the point of rudeness. Bernini’s fame, even at his young age, was second only to the cardinals and popes he served. His arrogance had been legendary.

“I thought the church was open today,” she said.

“It is not open to you, unless you are applying to become my assistant. But you will not be any use to me in that long skirt.”

She looked down. She had acquired voluminous folds of blue silk, a dress she hadn’t been wearing before. She felt air on her shoulders—her dropped-sleeves left them bare. “Well, not in this I wouldn’t,” she said, appreciating the rustle and texture. “But I’m not applying. I just want to watch you work.”

He said more gently, “Are you a traveler? You do not look Roman.”

“Yes. I’m a traveler. From a long way away. I’m with a group touring Rome. It’s our first day. St. Peter’s is so gorgeous, I can’t believe it. The Baldacchino is one of your finest pieces.”

Ignoring the compliment, he said, “If you are a traveler, then please travel to some other masterpiece. This church has many.” He waved her away and picked up the rod, checking the

Review of THE RENAISSANCE CLUB by RACHEL DACUS

The Renaissance Club is a standalone time-travel novel written by Rachel Dacus. The story follows May, a young woman who joins her boyfriend and other art scholars on a tour through some of the more famous art hotspots in Italy. The tour is guided by George, an older man with the secret ability to leap through time. George, seeing May’s passion in all things Bernini- a famous sculptor and playwright from the seventeenth century- hands her a “hall pass” for time leaping. This hall pass sends her careening into a fortuitous meeting with her inspiration and art idol- Bernini himself.

Thus begins an emotional and introspective journey for May as she finds her love of Bernini’s art shifting beyond what he can create, to what he has awoken within her. Bernini in all his arrogant and passionate glory helps May become confident in her writing and poetry, embraces her passion for art and history (especially as it is centered around his creations), and does not disparage her desire for children (as her boyfriend Darren is often doing throughout the novel). In kind, May centers Bernini by directing his passions towards his art, rather than the lives of others (for example, he could have dwelled on the betrayal of his brother and Constanza, but May was there to help him see through this difficult time). Bernini and May inspired each other, and eventually, this inspiration grew into a passionate and sweet love.

I enjoyed following the Renaissance Club’s journey through the soft, rolling countryside of Assisi, the stone city of Florence, the canal ways of Venice, and the ancient and history-rich Rome. If you are a great lover of art and history, or even a fan of Italy itself, then this would be a novel you enjoy. The landscape was a fluid thing in this novel which made it intriguing. I loved seeing where we would be taken next- and especially loved not knowing when May would be thrust back into time and into Bernini’s arms. I enjoyed embarking on this journey with May and had worried a few times about how she would solve the problem of maintaining a relationship with Bernini, while not altering history in any way. In this, I was not disappointed! The ending left me pleased- as the solution to this problem was as creative and enlightening as the rest of the novel. 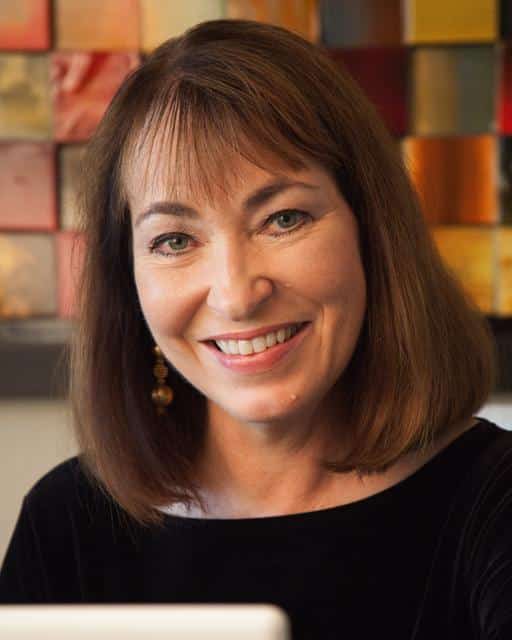 Rachel Dacus is the daughter of a bipolar rocket engineer who blew up a number of missiles during the race-to-space 1950’s. He was also an accomplished painter. Rachel studied at UC Berkeley and has remained in the San Francisco area. Her most recent book, Gods of Water and Air, combines poetry, prose, and a short play on the afterlife of dogs. Other poetry books are Earth Lessons and Femme au Chapeau. ​ Her interest in Italy was ignited by a course and tour on the Italian Renaissance. She’s been hooked on Italy ever since. Her essay “Venice and the Passion to Nurture” was anthologized in Italy, A Love Story: Women Write About the Italian Experience. When not writing, she raises funds for nonprofit causes and takes walks with her Silky Terrier. She blogs at Rocket Kid Writing.