Sapphire Smyth and the Shadow Five by R.J. Furness – Blog Tour and Review 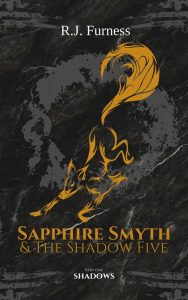 Have you ever seen something you can’t explain? Did it vanish as fast as it appeared?
Perhaps that thing you saw was lurking in the shadows, and you caught a glimpse of it before it went back into hiding.
There’s a good chance, of course, that the thing you saw simply emerged from your imagination.
Or maybe, just maybe, it didn’t…

Sapphire Smyth is no stranger to rejection. When she was only a baby, her father abandoned her after her mother died. Since then, Sapphire has never felt like she belonged anywhere, or with anyone. To make things worse, Sapphire's foster carers have now turned their back on her - on her eighteenth birthday. After living with them throughout her childhood, Sapphire has to find a new home. Is it any wonder she finds it hard to trust people?

Abandoned by the people she called family, Sapphire is alone and searching for some meaning in her life. Except that meaning has already come looking for her. When Sapphire discovers mysterious creatures lurking in the shadows, she soon realises that her fate is unlike anything she had ever imagined.

Sapphire Smyth and the Shadow Five is part one in the Shadow series by author R.J. Furness. This young adult fantasy follows Sapphire who, on her eighteenth birthday, is asked to leave her foster home after being given a bracelet- something that had been previously owned by her birth mother. A series of mishaps on her birthday reveal curious mysteries lying just beyond the human eye, as well as a world only dreamt of in fantastical stories.

This was my first-time diving into a serialized series, and I have to say that I quite enjoyed it. The experience reminded me of watching an episode of my favorite, engaging shows on Hulu- except the episode played out in my imaginary internal screen. I already can’t wait to “tune in” to the next installment. As for the story itself-

Despite the short length (once again, this is a serialized series), the plot was incredibly engaging. I have always been a fan of whimsical, creative, and imaginative tales, and this story had it all! The beginning was dark and ominous- setting the stage perfectly for a mystery that immediately pulls you in. The somber tone of the story shifts and turns and reveals a much larger plot and, maybe, just a smidgen of a brighter, if not more involved, future. While I am still learning about Sapphire’s character, what I did find is that she has a lot of healing to do in regard to her upbringing. Growing up in a foster home and living with the knowledge that a parent of yours did not want you must have left scars, followed by being ejected from her childhood home…well, we’ll see Sapphire’s internal journey towards acceptance and peace (hopefully! I’m an eternal optimist). I can understand her trust issues with those closest to her- such as her best friend, Ben.

Ben was also an intriguing character in the short amount of time we got to know him- I can’t wait to learn more about him! He’s a dark and fascinating yo-yo carrying mystery! As for his sister Grace- I’ll have to reserve judgment until further novels. Finally, the mystical beings introduced in the story were fascinating and unique! I have to say, after finishing this story I immediately began looking around at the shadows, wondering if they really could move. Was I really seeing the shadows moving at the corner of my eye? Or was it just my imagination? (I love it when authors make you wonder!).

The story ended perfectly! I can’t wait to see where Sapphire’s journey takes her.

If you enjoy short, engaging, imaginative, action-filled, young adult fantasy stories, then you MUST check out this series by R.J. Furness! Just wait- I can see this one getting its own movie- if not its own T.V. series!!