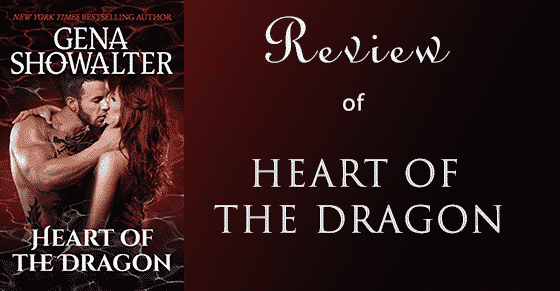 A Review: Heart of the Dragon by Gena Showalter

Heart of the Dragon

Searching for her missing brother, Grace Carlyle never dreamed she would discover a secret world populated by mythological monsters—or find herself facing a sword-wielding being whose looks put mortal men to shame.

But there he was, Darius en Kragin, one of a race of shape-shifting warriors bound to guard the gates of Atlantis, and kill all travelers who strayed within its borders.

Now Grace's life was in his hands, and Darius had to choose between his centuries-old vow and the woman who had slipped beneath his defenses and stolen the heart of Atlantis's fiercest dragon.

Heart of the Dragon Review

Heart of the Dragon is part of the Atlantis series by New York Times and USA Today bestselling author Gena Showalter. The story follows Grace Carlyle, a young woman who braves the wilds of South America in search of her missing brother. Unfortunately, Grace stumbles upon a cave leading her to the mythical world of Atlantis- and straight into the presence of Darius en Kragin, a dragon king sworn to protect the mythical realm. Darius has spent the past couple hundred years keeping his promise to protect Atlantis- even taking the lives of the possibly innocent people who unwittingly stumbled upon the world. This difficult task led to Darius suppressing his feelings and forced him to maintain a cool indifference in his demeanor and life. However, his emotions become fractured, and his impulses less controlled, when he comes face-to-face with Grace.

Darius and Grace build a rocky and unstable alliance in their quest to find Grace’s brother, while contending with their undeniable attraction to one another. Grace’s time in Atlantis, while short lived in the beginning of the book, was fraught with wonder and entertainment. I greatly enjoyed getting to know the other dragon warriors under Darius’s command. I was slightly disappointed when Grace had to flee Atlantis (though I understand her fear for her life since Darius was intent on killing her- though with no great deal of enthusiasm for the task). Luckily, I got to experience more of the mythical realm through Grace’s brother.

The chemistry and attraction between Grace and Darius was palpable and undeniable- so much so that I found myself irritated whenever Darius went on about how he still had a duty to kill her. I was more than three quarters of the way through the novel when Darius had an epiphany about his relationship with her and decided not to kill her. His insistence on ending her life throughout a majority of the novel (despite getting to know Grace and realizing she would never lead people to Atlantis to kill everyone) would be my biggest complaint. Other than that, the characters were delightful and the story was fun and fast-paced. I was so entertained that I finished it in ONE evening!

FOUR stars for Heart of the Dragon!