A Review of Jockblocked by Jen Frederick

She's always played it safe... College junior Lucy Washington abides by one rule-avoid risk at all costs. She's cautious in every aspect of her life, from her health, to her mock trial team, to the boring guys she dates. When a brash, gorgeous jock walks into the campus coffeeshop and turns his flirt on, Lucy is stunned by the force of attraction. For the first time ever, she's willing to step out of her comfort zone, but can she really trust the guy who's determined to sweep her off her feet? He's always played around... Entering his last year of college eligibility, linebacker Matthew "Matty" Iverson has the team captaincy in his sights. And it's his for the taking, if he can convince his quarterback Ace Anderson to give up the starting position. Luckily, Matty already has an edge-the hottie he's lusting over just happens to be Ace's childhood best friend. Getting Lucy on his side and in his bed? Hell yeah. Matty is more than confident he can have both, but when he falls hard for Lucy, it's time for a new game plan: convince the woman of his dreams that she's not sleeping with the enemy. 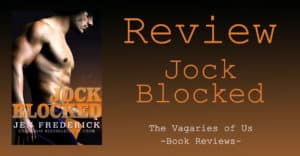 Jockblocked is the second novel in the Gridiron series by USA Today bestselling author Jen Frederick. The story follows Lucy Washington, a college junior who works at a coffee shop, spends a great deal of time practicing for a mock trial, and steadfastly avoids jocks- especially the football players. Matthew Iverson is a star football player who plays defense, but when he meets Lucy studying in the coffee shop, he immediately moves into the position of offense. As Lucy tries to respect the wishes of her best friend Ace- the football team’s quarterback- and avoid his teammates, all while trying to manage her health issues and mock trial team, Matthew-or Matty-finds himself in the unique position of trying to pursue his interest in Lucy while keeping his own team together- by trying to convince Ace to leave his quarterback position.

That was NOT the case with Jockblocked.

Lucy was a compelling character in the sense that she was very believable- a mix of flawed and intriguing characteristics and morals. Lucy was adamant and consistent in her defense of her friends- she did not allow people to run rough-shod over her feelings, and she certainly did not say or do something that went against her firm beliefs in how a friend should behave or act. I respected Lucy for these beliefs, and respected Matty for understanding them as well. With that being said, Lucy realizing that what she had previously thought were strengths in her character but were well-rooted fears keeping her from taking chances, was what truly won her over for me.

Now, Matty Iverson…where do I begin with him? I have always been a fan of strong, alpha heroes who grin frequently, have a wicked sense of humor, dirty mouth, and are respectful and persistent. Matty was all of that and more! He won me over with that foot rub…seriously, I need that in my life. His character not only adapts to the health needs of the woman he desires in every sense of the word (what guy is that willing to go out to eat at a vegan restaurant?), but he demands that his friends respect her, and even sacrifices something he cares about to ensure her safety and well-being. Matty…you may have just won your spot on my next book boyfriends post.

Jockblocked was a humorous and sizzling mix of intense chemistry, laugh-out-loud moments, compelling characters, and non-stop fun! I literally could not put this book down. While I initially read it on my kindle, I loved it SO much that I am ordering the paperback version and the rest in the series along with it!